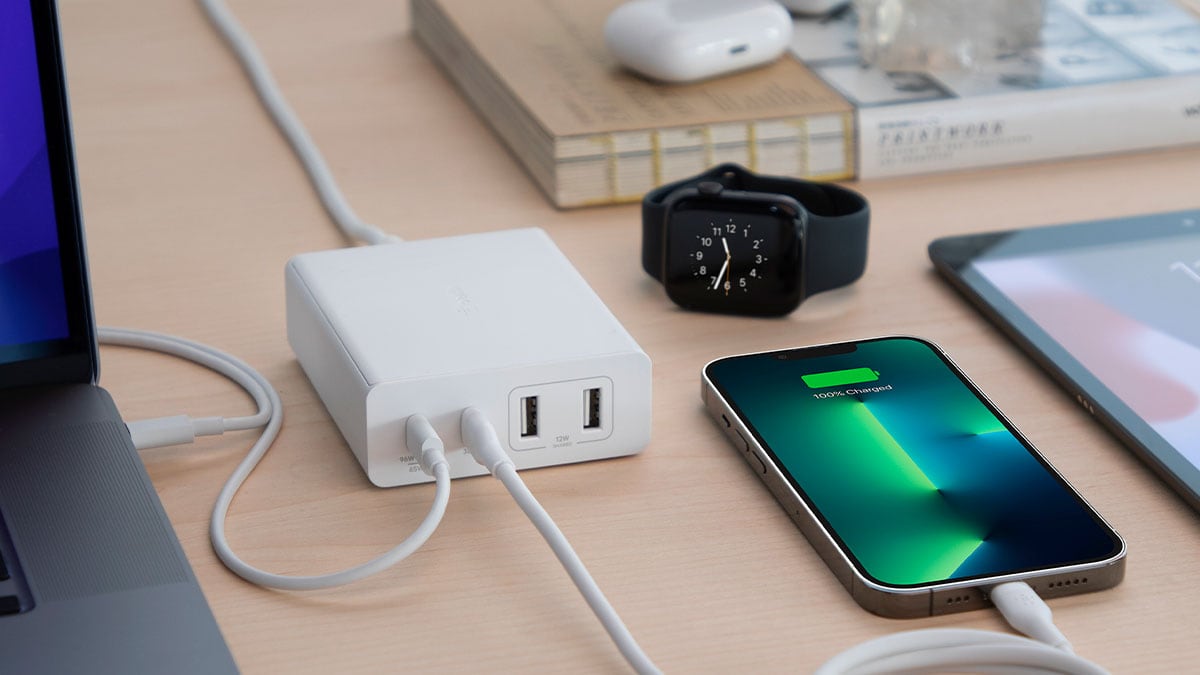 Whether you are finally travelling for business or returning to office, you probably have more than one gadget to charge in hotel or in your office. The Belkin BOOST↑CHARGE PRO 4-Port GaN Charger 108W is here to help.

As its name implies, this portable charger uses GaN (gallium nitride) technology that delivers higher wattages with greater efficiency but at a smaller form factor.

The BOOST↑CHARGE PRO charger is a white rectangular brick with one side having two USB-C ports and two USB-A ports with a total power output of 108W. It measures no longer than 10cm at its longest sides, while the shorter sides are less than 8cm.

Compared to bringing a power strip to your office or stashing one into your luggage, this is a much convenient charger to pack into your laptop bag or backpack. The only inconvenience is you have to bring along a power cord. The included power cord is 2m long, so the upside is you can place it anywhere on your desk easily.

I like that there are four rubber feet underneath the charger, so it does not move around when placed on the table top. This is something not found in many other chargers.

The charger’s Intelligent Power Sharing technology is said to recognise the power needs of each device and distributes the proper power output to all four connected devices accordingly. So, in theory, if only one USB-C port is in use, it offers a power output of 96W while you can use one or two USB-A ports at up to 12W for the maximum power output this charger can deliver.

However, if two USB-C ports are in use, it will offer two power outputs of 65W and 30W at the same time. And if all four ports are used, it will deliver a total of 107W instead.

For this review, four of Belkin’s latest BOOST↑CHARGE PRO Flex cables are used to charge devices from Huawei MateBook laptop to Apple iPhone.

Each cable variant is available in colours of black, blue, pink and white. Each cable is double braided for increased durability and its silicone technology resists tangling and kinking. A big highlight of this PRO Flex series is its a cable strap with magnetic clip and a circular metal plate (with adhesive on one side) for easy mounting. This helps to organise your table top instead of letting the cables go “haywire” literally.

Fortunately, before I conclude this review, I got my hands on the latest BOOST↑CHARGE USB-C-to-USB-C Cable 100W (from S$27.90, get it at Belkin). This double-braided cable supports charging up to 100W with double-braided nylon exterior for durability. I tried using this to charge the 16-inch MacBook Pro via the 96W port. And it took a shorter 62 minutes to charge the laptop from 50% to full.

Obviously, if you use all four ports to charge, the charging speed will significantly be reduced. But eventually, it will get all your devices charged.

However, the charger does get a tad hot even when using only the main 96W USB-C charging port. So, imagine when it is charging four devices at the same time. You probably don’t want to touch the charger.

On the other hand, you do not have to worry about your devices being be damaged from this charger. It is covered by a two-year product warranty and a US$2,500 Connected Equipment Warranty. In other words, Belkin will compensate you up to US$2,500 if your devices are damaged while using the charger.

VERDICT: At S$129, the Belkin BOOST↑CHARGE PRO 4-Port GaN Charger 108W is certainly not cheap. But it will certainly do the job if you have four devices that you need to charge at the same time.