Logitech MX Mechanical Mini for Mac: The wireless mechanical keyboard Apple should have made 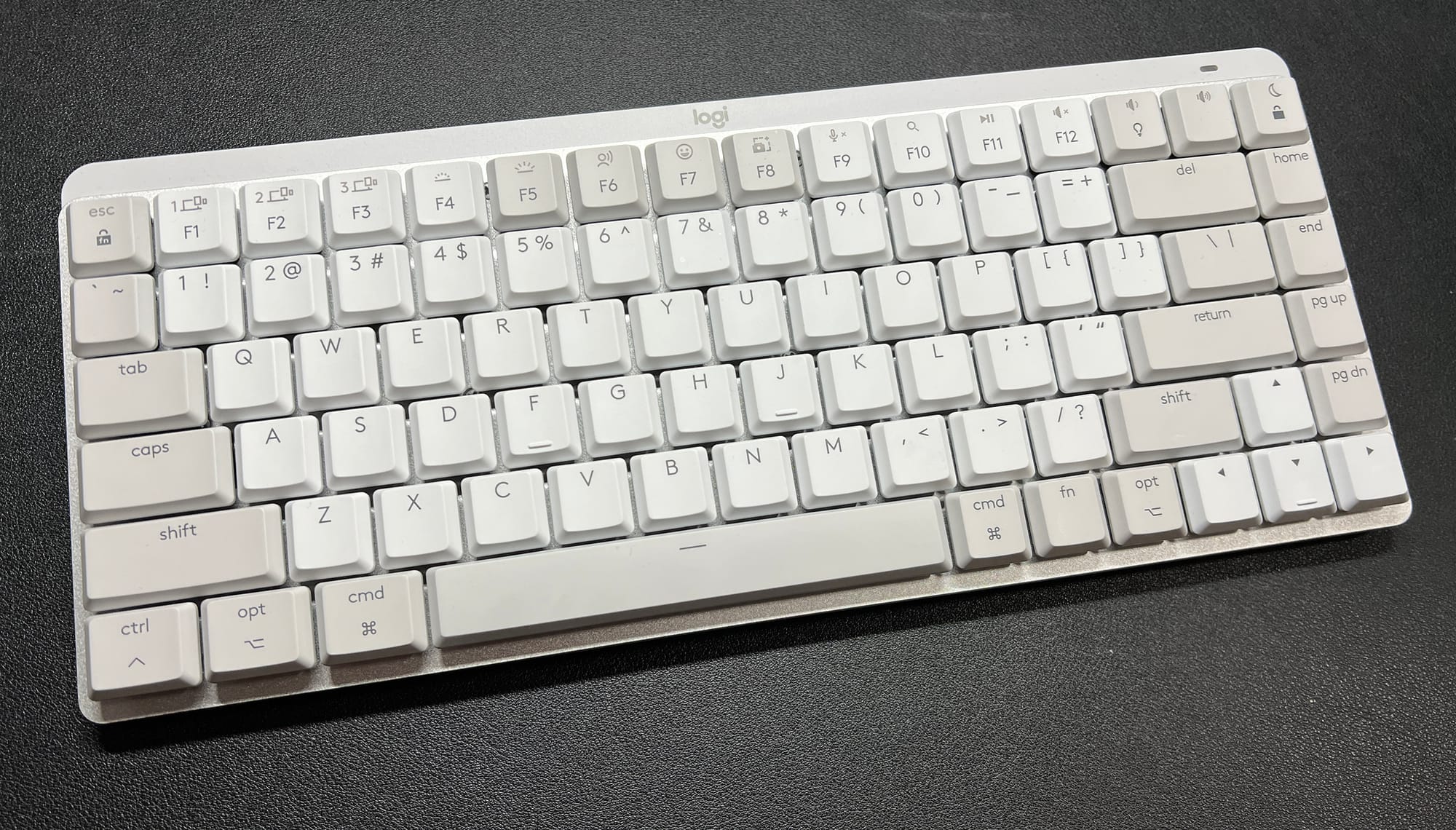 Personally, I have resorted to using the wired Keychron Q1 for my iMac, ditching Apple’s wireless Magic Keyboard in the process. That is, until the Logitech MX Mechanical Mini for Mac lands on my study table.

The MX Mechanical Mini for Mac is no different from the the “normal” MX Mechnical Mini, which is a 75% version of the MX Mechanical full-size keyboard I reviewed. There is no full-size version for the Mac version. Apparently, Mac users do not use the numeric pad much. But I am a big fan of 75% keyboards, as they save plenty of desktop space. So, the Mini for Mac works for me.

And while the “normal” one comes in three types of low-profile switches – Brown (tactile quiet), Blue (clicky) and Red (linear) – this Mac version features only the Brown switches for tactile typing response.

In addition, this Mac version comes in pale grey – a white and grey combo – while the “normal” comes in graphite. This pale grey colour is said to be more in line with Apple’s design ethos. I am not so sure when you look at the colourful Apple Silicon iMacs. That said, it is still very aesthetically pleasing.

The MX Mechanical Mini for Mac features a dedicated Mac layout with only the Option and Command keys replacing the Windows and Alt keys of the “normal” one. However, I am a tad disappointed that its top row does not have the similar function keys, such as screen brightness, expose and app view, found in the Apple Magic Keyboard.

In addition, this Mac version lacks the USB-A Logi Bolt dongle found in the “normal” version. It only uses Bluetooth to connect to your Mac. But since many Mac computers do not exactly have USB-A ports, it is probably something Mac users will not miss. And you can always buy the dongle, as it still works with it.

But like the “normal” one, this Mac keyboard can connect up to three devices on macOS, iOS and iPadOS. It comes with smart illumination that allows the backlit keys to light up the moment your hands approach, and automatically adjust to suit your lighting conditions for optimal battery usage. There is also the ability to customise shortcuts to speed up your creativity with Logi Options+ software.

You also get the “exposed” mechanical switches and the “floating” key caps of the “normal” Mechanical MX Mini. It comes with a pair of tiltable feet that allows the keyboard to be flipped up at an 8-degree angle. This is great as the keyboard is too flat otherwise. However, I would prefer another tilt angle of 12 degrees, as it offers even better typing ergonomics.

On the upside, this Mac version’s Bluetooth connectivity is very stable when connected to Mac computers. Trust me, as I have used many wireless keyboards, from Logitech to Razer, with several Mac computers. And I have always encountered intermittent disconnections with them.

Not so with this MX Mechanical Mini for Mac keyboard. In fact, there is not even a tinge of lagginess from the moment it was paired to my iMac. Plus, while it does not officially support Windows, I can pair it to my gaming Windows machine and type without any issues.

The best part though is the superb and pleasant typing experience. Like the “normal” version, the Brown switches offer a nice soft click despite not being as loud as my favourite clicky switches. Yet, the key travel is optimal with enthusiastic key response.

I found myself typing with few errors and really enjoy typing on it. In fact, I found the typing to be almost on par as my favourite Keychron Q1. My only real complaint is that the white keycaps show the “oil” smudges from my fingers after using over a month. But nothing a simple wet wipe wouldn’t solve.

On the downside, the Mechanical Mini for Mac is quite expensive with a price tag of S$259. Of course, if you compare it with custom mechanical keyboards, it is relatively affordable. However, it is more expensive than Apple’s latest Magic Keyboard with Touch ID.

In addition, there is very limited customisation allowed in this keyboard. Only the some function keys in the top row and last column can be rebind for other functions.

On the upside, battery life of this keyboard is quite superb. It is rated at up to 15 days with backlighting turned on or up to 10 months with backlighting off. With smart illumination turned on, I found the review unit to lost only 5% battery juice after a month.

VERDICT: With its stable wireless Mac connectivity, great typing experience and long battery life, the Logitech MX Mechanical Mini for Mac is seriously the wireless mechanical keyboard that Apple should have made.