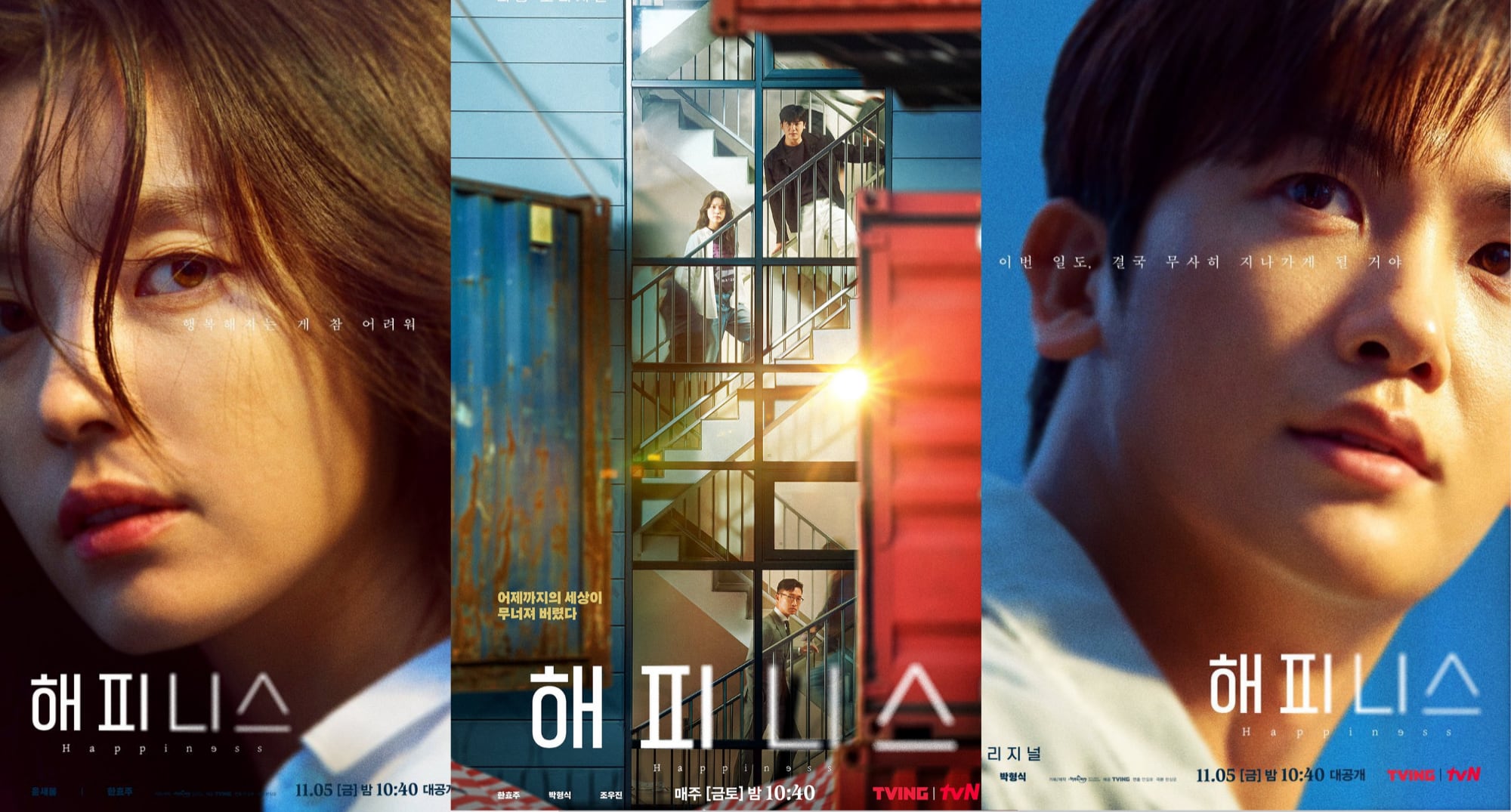 Today is the start of the May Day/Hari Raya long weekend! With the easing of Covid-19 measures, I bet a lot of people are planning to go overseas or head north to Malaysia for a getaway.

But if you are like me who just contracted Covid-19 or simply like to play it safe and stay home, there are plenty of shows that you can watch and be a couch potato during this long weekend.

Here are five of my personal favourite shows that you might want to watch during this long weekend.

Happiness
Available on Netflix and Viu

Happiness takes place in the near future, in which the release of a failed Covid-19 treatment drug “Next” has caused a worldwide pandemic known as the Rita Virus, a.k.a “mad person disease”.

This series marks the return of Park Hyung-Sik, member of idol group ZE:A, after finishing his military service. He plays the fake husband of a counter-terrorist member played by seasoned actress Han Hyo-joo. He agreed on the fake marriage in order to secure an apartment.

But the Rita Virus broke out in the apartment block they are staying in. This is not just another no-brainer zombie show, but it explores class discrimination, prejudice, human desires and selfishness in the face of adversity.

Ahn Bo-hyun of Itawon Class fame plays Do Bae-man, a military prosecutor who only works for money. That is until he met Cha Woo-in, played by Jo Bo-ah who gave up the lead role (played by Kim Se Jeong) in Business Proposal.

Woo-in was born into a rich family but lost everything including her father due to a conspiracy. She became a military prosecutor to seek revenge for her father. Bae-man will subsequently be influenced by Woo-in to combine forces as they look to seek revenge and justice on a common enemy.

It is refreshing to watch Bo-ah, who is more known for romantic shows, kicking some asses (literally) in some nice martial art moves. The chemistry between Bo-hyun and Bo-ah helps to elevate this show than it looks on paper.

Through the Darkness
Available on Viu

This show is based on 2018 book of the same title co-written by South Korea’s first criminal profiler Kwon Il-yong and journalist-turned-author Ko Na-mu. This is quite a heavy show to watch. But for crime show aficionados, it is a must watch.

The book highlights Kwon’s experiences as he battles scepticism, rigid hierarchy and turf protectionism to read the minds of serial killers. In the show, the names are changed obviously.

Veteran actor Kim Nam-Gil plays Song Ha-young, the criminal profiler. He was convinced by forsenics head, played by another veteran actor Jin Sun-kyu, to join his crime behaviour analysis team. The show follows the team’s arduous journey from being discriminated to being credited in solving South Korea’s most heinous murders.

Our Beloved Summer
Available on Netflix

If you prefer something light and humorous instead of the heavy stuff, this coming-of-age romantic comedy is definitely the show you want to watch. Choi Woo-shik (Parasite) and Kim Da-mi (Itawon Class) combine again after their work together in The Witch: Part 1, with Woo-sik playing Choi Ung while Da-mi plays Kook Yeon-soo.

They became lovers after filing a documentary together when they were in high school. But they broke up with a promise never to meet again. Fast forward to present day, Ung is now a successful artist while Yeon-soo is a PR expert. However, the documentary they filmed 10 years ago went viral again and they are forced to be filming together again by their mutual producer friend.

The show depicts their complicated feelings and growth as they try to get to terms of the present. It shows how love is not just about rings and promises. But rather love is often revealed in small random moves that might be unnoticeable, if we are careless. It also shows that there are many sides to a person. And many times, there are reasons behind why some people acted in a certain way.

Out of the list here, this is the only show that is still ongoing. Tomorrow follows the journey of Choi Jun-woong (played by Rowoon of SF9 fame) who became a part-time grim reaper after an accident.

He joins Gu Ryeon (played by evergreen actress Kim Hee-sun) and Lim Ryung Gu as part of the crisis management team. This team does a job grim reapers hate. That is, to prevent suicides. It is an exploration of the country’s high suicide rates and the underlying reasons.

However, Rowoon provides plenty of comic relief despite the dark undertones of the show. Not to mention, another highlight of the show is the over-the-top costumes worn by The Jade Emperor (played the ever-present veteran actress Kim Hae-sook). You might just want to watch each episode to see her new dress!

Six tech accessories to get during 6/6 sale